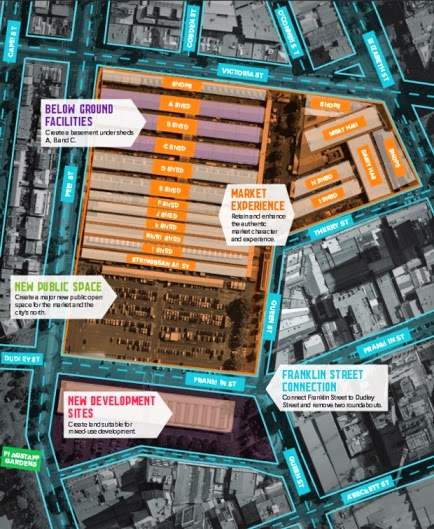 The Victorian State Government has confirmed the transfer of land at the southern end of QVM from State ownership to the City of Melbourne. The land is to be used as a component of the QVM renewal.

Following is part of the State Governments media release -
"The Victorian Coalition Government has signed an agreement confirming the Victorian Government's contribution to the redevelopment of Queen Victoria Market (QVM), signalling a further step forward in the renaissance of the city’s beloved Market site.

Assistant Treasurer Gordon Rich-Phillips said the signing of the land transfer agreement with the City of Melbourne paved the way for the Council to implement its QVM revitalisation project.

“The Victorian Government has contributed two parcels of Crown land to Council under terms which will ensure more than a hectare of public open space will be the centerpiece of this exciting renewal,” Mr Rich-Phillips said.

“This is set to revitalise the market, the renewal of which will see better stalls and facilities for traders and shoppers.”"