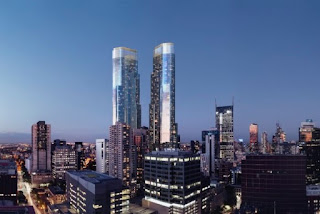 The development of the northern end of Melbourne’s CBD is pushing forward at a frantic pace with supporters and detractors expressing their views on a regular basis.

The proposed Munro site development is reaching the final evaluation stage with two preferred candidates for the multi level high rise on Therry Street expected to be reduced to one by June. The latest development announcement close to the Queen Victoria Market is this week’s twin tower 79 story apartment and retail complex slated for 350 Queen St. which is located between A’Beckett and Latrobe Streets, just two blocks from the market.

Like other developments there are concerns being expressed about the possible over supply of apartments in the city and issues with the impact on infrastructure, concerns about wind, over shadowing, traffic flow, and the list goes on. Proponents talk about the measured development of Melbourne as a liveable city for a growing band of residents attracted to what the city has to offer. And for those in the northern end of the CBD what could be more tantalising than living close to our wonderful Queen Victoria Market.

At the risk of displaying some self interest it is noted that the new development at 350 Queen St. will include a staggering 1600 apartments which translates to a lot of potential market customers. A couple of years ago the then CEO of the City of Melbourne, Kathy Alexander, told a group of traders that the gradual loss of locals parking in our market car park would be replaced by huge growth in inner city apartment living. Is this the sort of growth she was talking about and is this enough to give traders a springboard for gaining new business opportunities in the future?