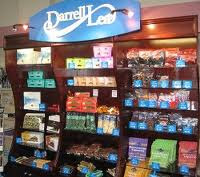 Darrell Lea has been absorbed into the VIP Pet Foods empire with its remaining stores to close as the new purchaser concentrates on wholesaling rather than retailing.


In the inevitable analysis of why this iconic family business failed a couple of points standout. Darrell Lea failed to move out of the 20th century while new competitors like Haigh’s and multinationals like Lindt re-invented their presentation with attractive, cutting edge stores and product merchandising that created value. The other main point concerns service. Darrell Lea’s service wasn’t bad but it wasn’t standout either. Failure to excite customers on service or product presentation makes it difficult for modern retailers to survive.
In an era where the decline of the middle-man has been actively predicted it is interesting that the new owners of Darrell Lea can reverse the trend. If they can see enough margin in the confectionary range to go back to a wholesale model then perhaps Darrell Lea products were overpriced as well.