Is An Underground Carpark The Best Option? 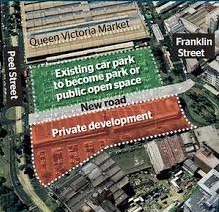 Of all the issues surrounding QVM renewal the car park is probably receiving the most discussion and with good reason.

The car park is a very important ingredient of market business, particularly for the food traders. Take away a car park for even a few days and those customers who bring their cars to do their week’s shopping will find alternative places to shop, perhaps permanently.

So why is an underground carpark being considered? Well, part of the current car park is required for an apartment development (which will help finance renewal) and a new road linking Franklin St. with Dudley St. It is partly a space problem. According to our Lord Mayor a car park cannot be built over the current car park because there are graves underneath. That doesn’t leave much alternative space except perhaps for the southern end of the market where apartment towers are being proposed or perhaps by acquiring nearby properties. It is also partly aesthetics. There are some who want a green parkland next to the sheds rather than a car park.

So what are the problems with going underground? Two possible locations for an underground car park are under A, B, and C sheds or under J, K, and L sheds. Firstly the cost is huge. One estimate put a figure of $80 million on such a project. Secondly, building an underground car park is incredibly disruptive. Basically, if overseas markets are a guide, you remove the sheds on top, scoop out the area required, build your car park and facilities, put a floor back over the top of the car park, and re-install the sheds. That is a long, disruptive process.

What are the alternatives? Well, you could build an off-site, but adjacent car park – perhaps even at the bottom of the new apartment towers proposed for the southern end of the market. Secondly, you could build over part of the current car park using shallow footings but go multi-level and still leave space for a green area. Thirdly, if the proposed roadway across the current car park is going to take away too much space then you could put that road underground, and make it deep underground away from possible gravesites.

Are these alternatives feasible? We don’t know. We are not city planners or engineers, but we do know when projects have great potential for harming our businesses. At a recent meeting of 24 traders, participants were asked if they felt an underground car park was a good idea. Around 20 said “N0!”. Recent comments on web forums suggest that many customers would find dingy underground car parks a real turn-off.

We would really love to hear counter arguments from the planners who believe an underground car park is the preferred option.