A Trader tells us about his cruel brother who, when he was young and impressionable, told him he was adopted - purchased at the Queen Victoria Market. Now he trades here, he loves the connection, and he has forgiven his brother.

A Trader may be re-thinking his involvement with aggressive customers after sustaining a broken finger on Saturday, and losing at least one days trade. The customer was believed to be high on drugs and ended up in the back of a divvy van. An altercation may have been difficult to avoid but either way the price can be considerable.

Overheard early morning in one of our food shops
Trader to Server - "Could you hurry my breakfast? I’m on my own today."
Server - "So, do you want a medal?"
Trader - "Ok. But where will you pin it?"
Server - "I’ll give you three guesses." 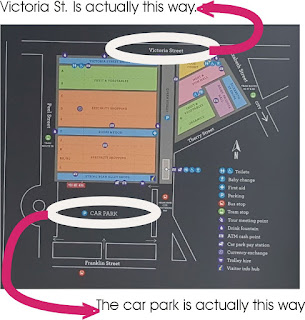 Misguiding Tourists - A new sign up on the top walkway has Traders and customers confused. The map is not correctly oriented so it is very difficult to get directions unless you lie sideways.

Racing around - Last week we noted how apprentice tipster Michael Mallon picked the third placegetter in the Cox Plate. This week Guru Pete was back in the tipping chair but celebrity tipster Tony P pipped the Guru with a third place in the Derby while Pete’s tip came 4th. We wonder if Pete is feeling the pressure.

Vehicle safety is a concern in the aisles with bollards controlling traffic flow. An ex Trader recalled how one of his lady customers used to call at his haberdashery stall in J Shed to order lace and then Company Director husband would drive his Rolls Royce Silver Ghost into the aisle during trading hours to pick up the order. Times have changed.

Last week’s strong winds caused one Trader to recall the time a mini tornado carried one of his seat covers high off into the wild blue, never to be seen again.

A Trader suggests a raft of measures to attract new Traders including one off allocations, tables and fittings provided, free rent for up to 4 weeks, and removal of all red tape. His theory is that there are potential new entrepreneurs out there who just need encouragement “to give it a go.”

A Trader notes that one way that Instagram and Facebook have changed retailing is to allow excellence in presentation. Products and services can be made to look extra good with some clever photography. His point is that gaps in our market are an aspect of presentation that fails by comparison.

Our bad (but irresistible) joke of the week – “Did you hear about the left-handed tool shop…. It’s just not right!!!!!!” 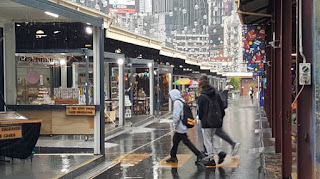 String Bean Alley Suffers – During a rainy day this week, the only customers in this shot taken at noon are hurrying to get under the sheds.

String Bean Alley Opportunity – The Melbourne International Dumpling Festival was held last year in Federation Square but this year will be conducted in a Night Market format at QVM on Monday 4th November, including SBA. The event is conducted by an outside organisation and it will be interesting to see the public response.