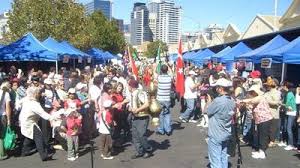 John Magno has been praised for his idea on making the new Victorian public holiday, Grand Final Friday, a special trading day with extended hours. It would appear that there is insufficient time to get the logistics right for this year but 2016 will be in our sights.

In the meantime John has some thoughts on events in A shed following the vacating of the Fruit & Vegetable traders on the north side of the aisle. We understand that the new open space is to be available soon and John considers that it would be an ideal spot for food festival type operations and in fact preferable to Queen St. Rather than clutter up Queen St. and draw crowds out of the sheds we could draw crowds in to the sheds and enhance the experience for the Victoria St. shops at the same time. John’s idea appears to have merit.

Got some ideas that you would like to test on Victraders.com? Just write to us or contact Greg Smith on 0406 222 020.

COMMENTS:
24/08/2015 08:45:15 Events being moved into a shed "The most sane idea I have heard in ages. Instead of  dividing the market into halves that would give it a flow because people would have to walk down the isles in most cases to get there a great idea if it is taken up. What do other people think of this? "