What Is Happening With A Trader's Association? 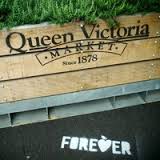 In 2014 QVMAC Trader Representatives came up with an idea to combine their new trader's association (QVM Traders Inc.) with the existing management/trader structure called the Queen Victoria Market Advisory Committee. The idea was to have one set of representatives in a combined function. A subsequent attempt to radicalise the QVMTI meant that the association part was put on hold and the QVMAC continued in its original format. But the idea has been resurrected, this time with management support.

Basically the intent was to have one group of trader representatives elected by traders to form a committee of management of a traders association. That committee of management would become the trader representatives on the Queen Victoria Market Advisory Committee and liaise with management on a whole range of market matters. Creating an independent traders association would give traders more autonomy, including conducting their own elections. The attraction for management is that they would then have a legitimate trader organisation that could sign binding agreements. As we head into renewal with all its complexities, there are likely to be a number of agreements that require signing.

A new group of traders is leading the push for a resurrected traders association, and, as we said, management are supportive of the concept. It is not yet clear whether the new association will be a re-vamp of the current traders association, QVM Traders Inc (perhaps with a new name), or a whole new association. Representatives of the new group are holding discussions with current QVMAC Trader Representatives on what Purposes and Values might guide the association. All parties seem to recognise that setting proper ground rules for a professional traders association is important. We are setting the stage for decades to come. There is a long way to go and a few hurdles to jump but initial discussions appear positive and a Draft Purposes and Values statement is almost ready.

Victraders.com will keep you informed of progress.


COMMENTS:
19/02/2016 18:14:27 trader association "The idea in principal of an Association sounds fine but for memory this could be 3rd try so why is this one any different?
How many members would be needed to be recognised as truely representative of all traders by market management?
Will this be funded and if so how ?
If proposals are signed off by the Association on behalf of it's membership as you say what does that mean for non members who could in theory make up the majority of traders?
I'm sure other traders will have more question and this forum will help explain a lot ."
There is a lot to respond to in your comment and you are correct in saying that other traders will have questions. This attempt at establishing a traders association does need to be much better than previous attempts and hopefully that is the intent of all parties. There will be much more to write about and I will make sure your questions are answered. Thanks for your input - Ed.

20/02/2016 20:59:51 Trader Association "What is the main differences between what traders have now and what the Association is proposing for traders?"
A great question. Can I put the answer on hold until all parties have a chance to comment. The simple answer is that a trader's association will have more autonomy than the current QVMAC, but also more responsibility, and it will probably need some form of financing. - Ed