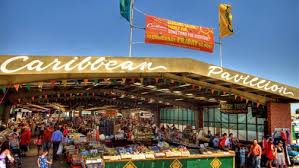 Despite once being described as one of the worlds “most notorious marketplaces” for the sale of pirate CD’s, Caribbean Gardens has survived half a century of operation.

Caribbean Gardens out at Scoresby started out as a boat testing facility, opened to the public as a lake and gardens complex in 1966, and held its first market in 1976. Many current QVM traders would have cut their teeth at Caribbean.