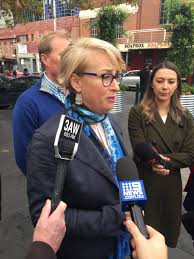 The first directly elected female Lord Mayor of Melbourne, Sally Capp, spent her first day since being elected at our Queen Victoria Market and immediately promoted a new renewal push with trader engagement a major focus.

“I’m absolutely confident that we can come up with a plan that continues to preserve the character and heritage of this amazing market while modernising it so that we can improve the experience for traders and shoppers,” she said.

Ms Capp has talked about a new commission to oversee the market renewal and draw the various parties together. Many traders were scared off by what some called “a bloody great hole” and if a commission can encourage a less disruptive solution that would seem to be a good course. Although as one trader pointed out, the “do nothing” camp will need to show some potential for accepting change and preparing our market for the future.

Sally Capp has significant credentials – Prior to the election she was Victorian executive director of the Property Council of Australia.
She began her career as a solicitor and has held senior posts at KPMG and ANZ.
Her other past roles include CEO of the Committee for Melbourne, chief operating officer at the Victorian Chamber of Commerce and Industry, Victorian agent-general across Europe and Israel and the first female board member of the Collingwood Football Club.
She is also involved in a number of charities and currently sits on the board of the Olivia Newton-John Cancer Research Institute and the Mary Jane Lewis Scholarship Foundation. She is also a board member for the Melbourne University Faculty of Business and Economics.
Sally Capp achieved just over 25% of the primary vote in the city election with her next nearest rival getting just over 15%.