What We Learn From CBD Emergency 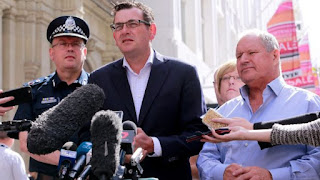 Friday’s city emergency involving a motor vehicle being driven on crowded pathways ended with disastrous consequences including loss of life. It has raised a number of observations and questions about how similar situations can be handled.

Firstly, let’s acknowledge the wonderful therapeutic value of the Queen Vic Market family. Friday’s events were incredibly traumatic and experts have encouraged the population to seek advice on how to handle their response.

Thousands of informal conversations have taken place at QVM since Friday afternoon involving traders, staff, management and customers as we worked through issues, attempted to rationalise reactions and essentially vented our fears and concerns while expressing great sympathy for those directly involved. It is good to have friends.

Much has been made of the QVM office shut-down during the city emergency. Apparently the offices in Deli Lane and at F1 were closed until the city offender was apprehended. Cleaning staff were stood-down by their employer but the public and traders were left to their own devices. Could more have been done?

The office shut-down was echoed across the city as businesses, particularly in Bourke, Queen, Elizabeth and William streets were closed, so QVM’s response was understandable. How do you extend that to an open market? Any public announcement would almost certainly have led to panic. It should be noted that the time between the driver doing donuts outside Flinders Street station and being shot and apprehended in William St. was less than 10 minutes. The emergency was over fairly quickly.

QVM Management has used mass SMS communication with traders before and perhaps an SMS to traders as soon as the offender was caught could have helped.

QVM is a public area but there are traffic control options that could be considered when faced with a rogue driver. Bollards could be placed at major entries like Therry St., Victoria St. and Queen Street. In fact the questions needs to be asked why shouldn’t we have bollards in place in every aisle and lane way during normal trading times as protection from this sort of behaviour? Peel St. gives multiple vehicle entry points to crowded pedestrian areas.

There is much to consider and no doubt there will be a complete review of the QVM response to this event. In the meantime the Victorian Government has set up a hotline to assist those seeking further counselling (tel:1800226226) and they have launched a public appeal to assist the relatives of those who lost their lives in the tragedy. Details of how you can make donations are available here - http://www.vic.gov.au/bourkestreet.html


COMMENTS:23/01/2017 06:54:59 Bourke St "To say Managements actions on Friday were disappointing is an understatement.!! To go into lock down and leave traders to work it out for themselves is as bad as the captain of a ship leaving while it sinks... Yes, it was only 10mins but what would have happened if had driven up Queen st ?Who would have been any wiser? It only went up on the internet after the fact. For management to go into lockdown, meant someone must have notified before that. My Question is.
Who made the call? Who thought it was best to take all the staff off site and leave the traders and customers to fend for themselves?Traders will always have each others back, I left wondering about if the same can be said for management. Oh and please don't spin this that we didn't want to panic customers... The moment it was decided to go into lockdown, someone should have send sms's to traders making them aware of the situation. We too have a responsibility to make sure our staff are safe ... " Drita Mclennan
Posted by Editor at 17:42