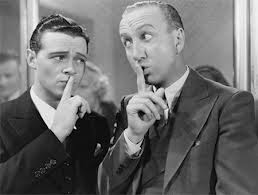 The POD – Bruce Pham is doing a great job in the POD but a trader has suggested that perhaps the next resident could be someone with less technical expertise than Bruce. A more mainstream trader might give us another view of how the POD might enhance business. (In fact we need a few PODs don’t we? – Ed)

Anger At Double Standards – one of our market colleagues has pointed out that two of our box hire operators who wore red union shirts at Friday’s anti-renewal protest are also in secret discussions with management about how box hire might take advantage of renewal changes. Is that double standards or just hedging your bets?

Reaction To Protest Rally – apparently there has been an attempt by organisers to talk up the rally although the comments we have heard from traders include – “Disappointing”, “Embarassing”, and “If they had any real alternatives that would have been the time to air them.”

Paying Rent – Another Saturday and another long queue at the office. One trader said they were not aware that they could actually pay their rent at any bank.    Another suggested that QVM invoices could include a barcode that would allow payment at any Post Office. This trader pays most of his bills at the local Post Office.

Retail Plan – As usual not a big crowd turned up at Thursday’s after market briefing but this document is one that traders need to take a really good look at. One attendee told us that a slide showing a deli and a butcher on Victoria St. caught his eye. These are just concepts for discussion but the options for 7 day trading on the outside of the market (while the rest of us get to lead a normal life) makes a lot of sense. The next briefing is Tuesday 2nd May at the Engagement Hub – 3:30-4:30.

What’s Next? – one trader commented on Saturday - “Well, we’ve had our protest rally. Now, can we actually start moving forward and getting things done around here?” 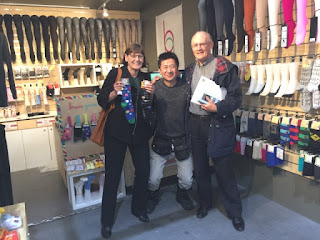 Never Miss A Photo Opportunity – a visit from Board members Jane Fenton and Patrick Burroughs was a great photo opportunity for this trader.

Betty Looks Great In Red – Betty Jennings donned a red union T-shirt and cap as a bit of a lark on Saturday but refused to leave it on long enough for a photo. There is something incongruous about an independent, hard-nosed entrepreneur in a union uniform.