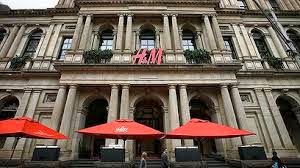 H&M exists in 53 countries and as of 2013 employed around 116,000 people. The first store was opened on the high street of Västerås, Sweden in 1947. It had 2,325 stores at the end of 2011 and 2,629 stores at the end of August 2012. It is ranked the second largest global clothing retailer, just behind Spain-based Inditex (parent company of ZARA), and leads over third largest global clothing retailer, United States based GAP Inc.

The branding consultancy Interbrand ranked the company as the twenty-first most-valuable global brand in 2009 and 2010, making it the highest-ranked retailer in the survey. Its worth is estimated at $12–16 billion.


H&M, and the soon to be opened Emporium Shopping Centre, will add significantly to the fashion mix in Melbourne’s CBD.