Why White Ribbon Was So Important To QVM 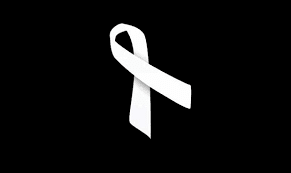 White Ribbon, The movement to end men's violence against women, is a worthy cause in its own right, but Friday’s public assembly in Queen St. is also important for wider reasons.

Strangely, it was the sort of event that Victor Gruen and the inventors of shopping malls might have had in mind back in the 50's and 60's. Vienna born architect Gruen, and his contemporaries, envisioned an ancient Greece style community square when they designed the concept of shopping centres. They were to be gathering places where men in particular could socialise and mix in the middle of sprawling suburbias that lacked cultural stimulation.

On Friday market traders Leah Moore and Robyn Faulkner spoke at the public gathering on Queen St. as the community issue of violence against women was highlighted. QVM had publicised the event on social media earlier in the week and Robyn Faulkner did the rounds of the market on the day ensuring that as many traders as possible were wearing their white ribbons. The combination of all this activity ensured that an important social issue received due public attention. 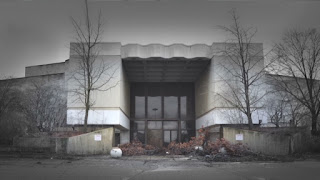 Victor Gruen was a socialist and he became very disillusioned as consumerism took over the mall concept. The glut of empty shopping malls today in the US is seen as an eerie reminder that the world got it wrong when it focused on consumerism and lost its connection with the human community. 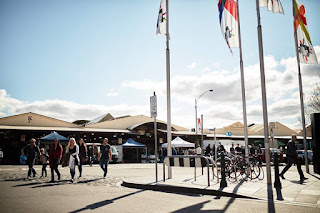 Public markets are inherently tuned to community issues. You only have to listen to people like David O'Neil to understand the importance of embracing and enhancing community involvement. It is no accident that city planners and strategists have included public spaces including a Market Cross in QVM Renewal plans.

Events like Friday's are important reminders of the influential role that public markets can play in our society. This particular one was promoted by the market, allowed traders to show their humanness, and connected with customers in a different way. It ticked lots of boxes.

COMMENTS:
27/11/2016 21:04:01 White Ribbon Day "We totally agree White Ribbon Day is very important for QVM. Praise must go to Phil Cleary who came up with the idea for the event over a month ago. As we all no Phil has campaigned for over 30 years against violence against women and he shared a personal family story at the event about the murder of his sister.
Also N.U.W President Caterina Cinanni provided a very interesting speech.
Greg as you are a elected trader representative it would of been nice for you to attend. Unfortunately you were conspicuous by your absence.
Maybe next time.

Thank you to The Team at S.T.A.G. for their input - Ed