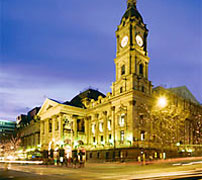 Melbourne City Council candidate Brooke Wandin was elected to council last year but then excluded after it was found that she had falsified her residential address. The machinations that followed are having ongoing implications for the make-up of the council including the fortunes of Queen Vic Market trader Michael Caifia who was also elected.

There has been much legal debate over how the election should now be treated including a decision by magistrate Michael Smith at the Municipal Electoral Tribunal which was subsequently overturned by VCAT president justice Greg Garde this week when he ordered a recount.

The whole matter is quite complex with a recount having significant implications for council. The voting majority of Lord Mayor Robert Doyle is at stake as is the future of QVM Trader Michael Caifia. Michael could lose his seat in the recount to either Susan Riley or Nick Frances Gilley.

Actually this is not so much about a market trader losing his seat because ironically Michael is not able to vote on issues to do with our market. Conflict of interest rules prevent all councillors from voting on matters in which they have a direct interest. At Tuesday’s Council meeting, Michael had to leave the room when QVM renewal details were presented to Council.

No doubt more is to come including the possibility of a Supreme Court challenge to the latest decision.