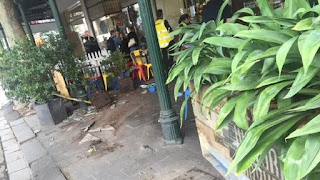 The dramatic chase of a black BMW by police in the CBD on Tuesday involved diners at one of our QVM cafes on Elizabeth St.

An attempted drug bust on the corner of Queen and A’Beckett Sts resulted in a city chase and the ramming of police cars. At one stage the pursued vehicle reversed onto the pavement and into tables outside a QVM cafe on Elizabeth St. Luckily no diners were hurt in the incident.

The driver later abandoned his vehicle in a city side street.