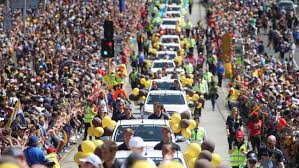 Grand Final Friday is a little way off yet but last year we decided that QVM could have a special impact on this new public holiday and it is time to do some planning.

The city of Melbourne is the focus at AFL Grand Final time, not just because the game is played at the MCG but also because of the big lead-up including the Grand Final Parade on the Friday before the match. We traded on that day last year and received some good reports as crowds ventured to the market, before and after the parade on Swanston St.

The market has a history of football related activities and over recent years many young Melburnians have met their player idols at football clinics under the sheds. So it is time to think about a key role for our market. As one trader put it – “Let’s make The Queen Victoria Market a key destination on Grand Final Friday”.

What sort of activities could we promote? How could your business contribute? What ideas do you think would work on such a day?