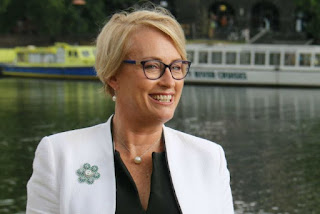 Sally Capp is a contender in the upcoming election for Lord Mayor of Melbourne (some would say the leading contender) and she has at last made some statements about Melbourne’s most important icon – QVM (not an ounce of bias here on Victraders).

Ms Capp has been quoted in newspapers and seen on TV as she gives some welcome professional commentary on our much debated market. Her pledges if elected include creating a 6 person Commission to oversee the QVM renewal development process. The Commission would be made up of two traders, two council representatives, a community person and a member of the QVM Board. She is also proposing that a trader sits on the QVM Board.

The “Trader on the Board” idea has long been seen as a desirable outcome by traders who are eternally suspicious of decisions made behind closed doors. The Board and previous Lord Mayor, Robert Doyle, have rejected the idea due to conflict of interest considerations. The idea of a trader voting on Board matters that may impact on their personal business or the personal business of co-traders is seen as undesirable. There may be something in that, but Sally Capp’s intent to counter “the sense of mistrust” could certainly be assisted with a trader in the Board room. Would a separate Commission assist, or simply add to, the already crowded room of politicking and debate over QVM? That probably depends on how it is set up and we look forward to hearing more about her intent.

Ms Capp’s support of the council blueprint for renewal (Herald-Sun article 24/3/2018) is certainly welcome and the Mayoral election in May will bring much anticipation for traders.

In the meantime of course we have a market to run and getting on with business will be the focus for traders, QVM Management and our new CEO, over coming months.

26/03/2018 12:33:57      Lord Mayor Candidate     "I believe this idea of a trader rep .at Board level had been proposed many times without success over the past few years, but the suggestion has merit as long as it is a genuine attempt to bridge the Trader/board gap and taken seriously not just as a token gesture.
The bigger Question might be who can converse at both aTrader and Board level and whether the role has 2 representatives so as to alleviate any suggestion of a conflict of interest and to be better informed across all aspects of the wider trader communities concerns.
A position as important as this would need to have the consensus of the majority of stall holders( Election ).
More input and opinions needed on this one."         Steve Mc
Thanks Steve. You raise some good points. I have posted a separate article (see above) to explore this further - Ed.