We Shouldn’t Be Crying Over Plane Trees

The Royal Historical Society of Victoria joined the crowd of outsiders keen to judge the QVM Renewal and were particularly condemnatory this week of the plan to remove seven Plane Trees from Queen St. during the construction of the New Market Pavilion. Their concerns were reported in the Melbourne press. 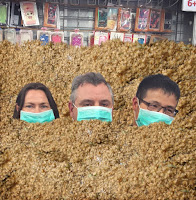 Plane Trees were to be incorporated in the original design for the pavilion, a decision which drew complaints from many traders. Perhaps the Royal Historical Society don’t realise that, for many traders and customers, Plane trees are trees of the devil. Plane trees have been globally condemned for the intense irritation that their fibres can cause for many humans. At QVM there are times of the year when the fibres collect in large quantities and are difficult to escape. When the NMP designers decided to remove these seven trees, partly in response to trader concerns, there was a big sigh of relief.

There are lots of reasons why trees are wonderful components of human existence but putting Plane Trees in close proximity to humans was never a good idea. And of course the removal of these particular trees can be quickly compensated by growing alternative species in alternative places. An asphalt car park about to be converted to a green park at QVM comes to mind.