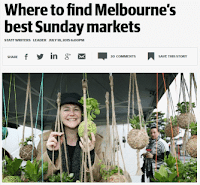 Ex trader Lance Dyer may have left our market but QVM is still in his thoughts as he wrote to us this week concerning a Herald Sun article on Melbourne’s best Sunday markets. - http://www.heraldsun.com.au/leader/inner-east/where-to-find-melbournes-best-sunday-markets/story-fngnvlpt-1227444264085

Lance pointed out that the exhaustive list of Sunday markets did not include QVM. Dandenong and Caribbean Gardens markets were mentioned plus a whole lot of monthly markets but not QVM. South Melbourne Market also missed out but how QVM as one of the world’s premier markets could be excluded is an absolute travesty. 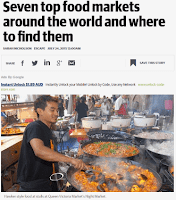 We are not sure if there is any connection, but a few days after that article the Herald Sun published an article in their travel section titled Seven Top Food Markets Around The World and QVM was number one on that list. - http://www.heraldsun.com.au/travel/holiday-ideas/seven-top-food-markets-around-the-world-and-where-to-find-them/story-fnjjv39c-1227454053832

So, should we forgive them Lance?

Have Your Say – click here.
COMMENTS:
26/07/2015 21:19:18 Market list "Absolutely not !!! The  second list was again only talking about food, no mention of general merchandise  and what else the market has to offer.
It might also be added that when concerned traders went to MCC it wasn't traders from the fruit,meat or deli sections, it was again general traders who seem to the heart of the Queen Victoria Market  in their mind . "
Good point and when Sunday trading was first suggested it was general merchandise that embraced and supported the concept with other areas of the market following reluctantly behind. And who embraces and serves the many hundreds of thousands of tourists each year who consider our market an important part of their Melbourne experience - general merchandise again. Thanks for your input - Ed.