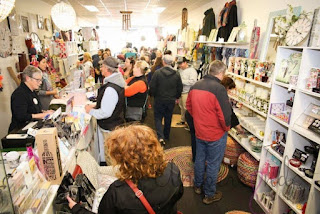 Community Action Aids Struggling Retailers
A Victorian country town has found a unique way of supporting its retailers and they have done it with an online campaign that challenges online retailing. Confused? Here is how it works. – An online campaign called the Colac Cash Mob challenges shoppers to spend at least $20 each at struggling main street stores instead of spending their money online.
Once a month, shoppers descend on a selected store and spend up. They don’t know the store in advance so meeting up in town has an air of expectation about it. Struggling retailers are very grateful for the cash injection and the shoppers seem to love the experience while making a worthwhile contribution to their community. Fruit Box Culture
A Sydney visual artist is fascinated by the design of fruit and vegetable boxes and started a collection. He has found that fruit boxes from individual growers can have elaborate colourful designs with unique home grown elements that individualise growers and often tell a bigger story.
The National Library of Australia has now added cartonography to its online collection as “a great example of the importance of cultural artefacts, (and are) indicators of current cultural trends in the fruit growing industry and Australia as a whole.”

POCO Is The New Player In Home Furnishings and Hardware.

POCO has been described as the “Aldi-style” Home and Hardware store and they have emerged as a frontrunner for some of the about-to-be-vacated Masters Home Improvement Chain stores.


POCO is a South African company with a high profile in Germany and claims it has everything to “make your house a home”. POCO currently has two stores in Australia at Blacktown and Casula.

Some High Profile Retail Failures.
Man To Man and Jones The Grocer have called in the liquidators this week (both for the second time) as retailers continue to struggle with trading conditions. The Jones The Grocer announcement came on the back of retail trade figures which showed that specialty food outlet sales declined 1.1% in April.
Man to Man was taken over by new owners in February 2015.
Meanwhile, Sainsbury’s, the UK’s second largest supermarket has reported its worst performance since June last year with commentators suggesting that the move from multipack deals to price cuts has hurt the chain. Competition from the likes of Aldi and Lidl is seen as a contributing factor.

Kmart Eats Up Target
Retail press is dominated this week by suggestions that Kmart has cannibalised Target. As the two brands attempt to gain very similar sectors of the market it is clear that Target is the loser. One commentator has suggested that the challenge for the owner of both chains, Wesfarmers, is how to successfully differentiate the two offers or perhaps to merge them completely.


Eastland To Charge For Parking
Eastland Shopping centre out in Melbourne's east has come under fire from shoppers with the decision to introduce parking fees for stays longer than 3 hours. Staff will be charged $4 per day in designated staff parking areas.
A local survey suggested that 80% of shoppers would go elsewhere if required to pay. Eastland is adjacent to a major railway station which is believed to cause the spike in long term parking at their facility. Fees would start at $3 for 3-3.5 hours with a maximum fee of $30 for stays longer than 7 hours.