A Buzz In String Bean Alley - But Not Just From Customers 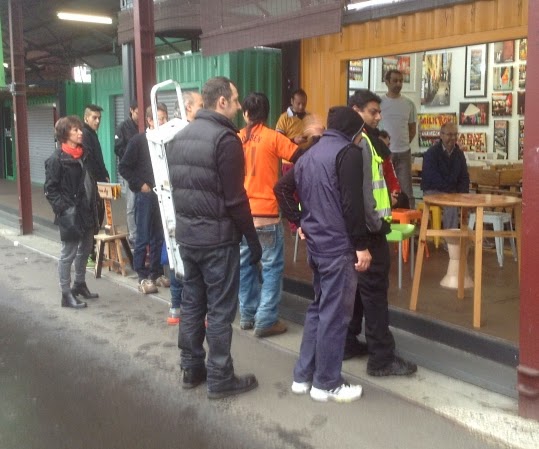 It was a quiet Saturday morning around 8:15am. Many stall holders were still setting up at their top-end stalls. But above the cacophony of noise normally associated with set-up at QVM there was an occasional excited murmur, followed by loud exclamations, and even a loud cheer or two.
The site was the Intone Photography container in String Bean Alley and the occasion was Australia’s World Cup match against Chile. As the match progressed, it was possible to determine the state of play purely from the sounds emanating from the crowd huddled around a small TV screen at one end of the market.
There were the disappointed moans as Chile scored its first goal, closely followed by another. Then there was the crescendo of cheering as Australia scored its goal which surely must have been heard in A shed and beyond. Then there was the loud cheer tailing off into a gentle moan as Australia slipped one the wrong side of the post.

QVM has its fair share of soccer (football) addicts and the balance of traders no doubt reflect Australia’s passion for all things sport. The World Cup is a huge event. One trader’s wife rarely attends the market as she looks after a young family but at World Cup time she fills in as her husband is given one month off to indulge his passion for the world game.
Australia’s next match is against The Netherlands on Thursday morning at 2:00am. Expect some bleary eyed traders on Thursday.