How It Is Done In The City Of Markets

Trader, Ivano, recently returned from a self funded European trip which included a visit to the famous Barcelona Markets in Spain.

Ivano is at pains to point out that there are many significant differences between our QVM and the European markets. A direct comparison is often not relevant although many things can be learned particularly from a market focussed city like Barcelona and the fact that many of their key markets have experienced, or are experiencing, renewals.
This is a report on Mercat de Sants in Barcelona.

Redevelopment -
The market building has been completely renewed. It has been divided between stalls, service and facility areas, parking and a supermarket area. There are now 3 underground levels which will include parking spaces / loading and unloading areas / storage and cool rooms.

Merchandise Mix -
Of the 55 traders trading previously at the Mercat de Sants 25 have opted to continue trading and take up stalls in the redeveloped market. These will be primarily food vendors, with a limited number of non food vendors in lock up booths located around the outside of the market building.
In the provisional market currently trading a few streets from the market site there has been a noticeable increase of stalls selling take away meals, that can be picked up from the market and then eaten at home. The variety on offer of ready to eat take home melas was quite vast.
There was also a home delivery service operating, which according to the information I received was run by a private business.
Many stalls had a very local offer available, including offal, snails and other locally appreciated products.

Trading in the Temporary Market - 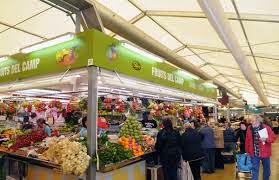 Traders were very satisfied with trading in the temporary market and no trader indicated that they had suffered a downturn in trade due to the relocation and works being undertaken in the market building.

Trade - My initial visit in the temporary market took place at 2:30pm Friday afternoon and then I returned to the market at approximately 4:30-5pm.

During my initial visit traffic flow was low, but upon returning at the later time footfall had visibly increased. It was explained to me that since in most Barcelonan families both husband and wife worked, trade would usually pick up later in the day, with Saturday being the standout day for trade.

Customer Demographic - Markets are used extensively by most people residing around the market. Barcelona seems to have densely populated residential areas right through the city and surrounding all the Markets. Therein lies a major difference both with regards to the Queen Victoria Market and the London Markets which are currently surrounded by offices rather than families ( it is of course true that QVM has a considerable residential area to its north and west, but it differs from Barcelona for a number of reasons largely due to its large number of international students and the market hours which are not conducive to shopping for the residents around QVM). The residents around Mercat de Sants are largely lower socio economic groups often comprising of immigrant families, which may be reminiscent in some ways of QVM and its surrounding areas a few decades ago.

It is also important to understand the relatively low number of supermarkets in Barcelona. Another factor that contributes to the healthy trade at the Mercat de Sants and other markets in Barcelona involves the use of seafood in the Catalonian diet and the general reluctance to buy seafood from supermarkets even if they are present. When I enquired about that aspect I was told that as supermarkets don't offer either the variety or quality of the market people are very unlikely to opt to buy either seafood or meat from a supermarket.

Stall Presentation - Stall presentation in the temporary market was quite reminiscent of current food stall presentation at the Queen Victoria Market. This changes dramatically in the redeveloped market, with a very modern, and designer approach. Very different to the 'grungy' style being currently suggested for the QVM.

Market Management Structure - It was very interesting to listen to the management structure on which all the Barcelona markets work.
Basically the Barcelona City Council set up a specific department which was required to oversee the running and upkeep of the markets. This department was set up in 1996 and is known as the IMMB. It currently employs 70 people.
However the Council requires each individual market to look after the day to day running of the market. This is done through a traders association, which is obligatory for all people who take up trading at the market. The traders then appoint a group of traders onto committees which are given the responsibility to run the market and look after the day to day running of the market. That is the contracting of the cleaning, the payment of the lighting, water and other services which involve its day to day operations. The City Council takes on any outstanding maintenance that needs to be done. Which includes aspects like painting, replacement of fixtures, infrastructure issues etc. The costs of the redevelopments or renewals are shared by both traders and the City Council. In the case of the redevelopment of the Mercat de Sants traders contributed a proportion of the construction costs (as well as the cost of the fit outs of their respective stalls in the new market), the City Council contributed the bulk of the total cost and the new Supermarket located in the redeveloped market contributed as well

The market rent is basically paid partly to the City Council and partly to the Traders Association. From the information I was given I understand that rental breakdown to be split approximately 50% to each party. From that rent the Traders representatives are expected to hire and pay for staff and the day to day running costs of the market. There is also a co-contribution to Marketing and Promotions (although the exact breakdown of the costs between the City Council and traders of the marketing and promotions costs and who takes on the responsibility for the conceptualization of the marketing and promotions initiatives was somewhat unclear).

If traders feel that they need more funds they approach and request the IMMB to consider a request for more funds.

Redevelopment Decisions - Given the management structure in place as described above, it is not surprising that all decisions made regarding redevelopments and major works in general are made in a democratic system involving traders at the markets. Usually this process can take a number of years and does require a majority decision for the project to go ahead. From explanations given to my questions it appears that even traders who opt not to trade at the redeveloped market, perhaps due to their unwillingness or inability to pay their part of the costs for either the works or for the fit out of their new stalls, give their consent for the works to take place and then take up an offer from the IMMB which pays traders a fee ( which may be seen as compensation ) for the loss of their stall resulting from the decision to renew the market ( it is my understanding that a m2 rate is offered to traders, which can be accepted or not by the traders. Traders who do not take up that initial offer but don't wish to take up trading in the new market undertake one on one negotiations till they reach a price both parties agree on ).

Overall Impressions -
The markets are run in a very collaborative manner. There is shared responsibility.
Traders are required to invest in the market not only in lieu of their business location at the market but also by being partly responsible for the day to day running of the market. The Mercat de Sants appeared to be a healthy market.
The renewed market was quite impressive, both aesthetically as well as functionally.
The location of the markets and customer attitudes towards the market make this market (as it does the other markets in Barcelona) quite different to the Queen Victoria Market. Barcelona appears to be continuing its strong cultural and culinary connection to markets. Although a suggestion was made by one of the IMMB representatives that there is a current challenge involving the new generation, but the 30+ age group seems strongly entrenched in market culture.
It may be argued that this is partly/largely due to the continued effort by Barcelona's City Council to continually track and maintain the markets relevance in a changing environment. It may also be true that cultural and demographic change has been slower in Barcelona than in other parts of the western world. At any rate it seems likely that a number of factors have contributed to the continued attractiveness and relevance of Barcelona's markets. They being things like, the strong cultural and historical link to markets, a very clear and consistent vision and policy to keeping markets relevant, the location, number and accessibility of the markets in Barcelona, the relatively few supermarkets or other direct competitors in Barcelona. Add to this a very robust management structure and a continual upkeep both in terms of offer and physical infrastructure and we begin to understand the underpinnings and reasons for the strength and continued viability of Barcelona's markets.