Should Traders Join A Union 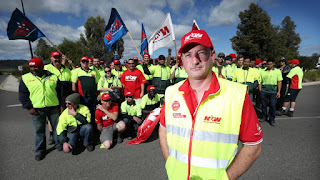 Box hire operators are reported to be active around our market asking traders to join up to the National Union of Workers. They state that their intent is to gain guarantees for the future of traders. On the surface of it, any measure that eases the uncertainty of renewal and helps our market is worth looking at. But is yet another interest group going to achieve that and is this the right one?

We have written recently on these pages about interference from outside groups like Friends of the Market ( http://www.victraders.com/2016/05/leave-our-market-alone.html ) . That article suggested that true friends would be better off supporting our market by continuing to buy our produced rather than interfering in matters that are best left to traders. The same might apply to union membership.

The National Union of Workers was formed back in 1989 when unions were amalgamating into national bodies and included the old Storemen & Packers Union amongst others. They were heavily aligned to the food and grocery industry but have since broadened their involvement into areas like general warehousing, pharmaceutical manufacturing, market research and merchandising and sales representatives. Their wiki entry makes no reference to retailers although, in a progressive move, they do have what is called "community membership" which presumably caters to any interested party.

Traders may need to decide if membership of a union is compatible with small business entrepreneurs. Perhaps a $50 joining fee could be seen as a small price to pay for some assistance (as yet not quantified) during renewal. Others may prefer to wait for trader elections in September when traders can decide who is best to represent them.

The danger of getting more involvement from outsiders, whether they be customer groups, unions or politicians, is that the mass of different opinions and purposes makes it very difficult to get progress and some cynics would suggest that this is the intent all along. Let's hope that the trader election is not unduly delayed and we can get down to forging our own futures very soon.