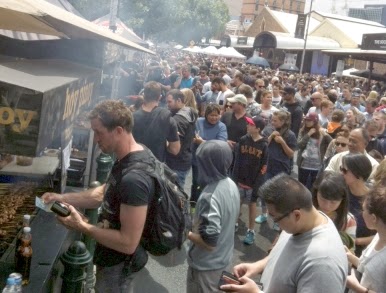 Last Sunday’s Melbourne Barbecue Festival has been described as the biggest day event on QVM’s Queen St. in 20 years. Queues for the luscious slow-cooked BBQ meats stretched up into the top end aisles and were only diminished as vendors ran out of food and asked customers to come back for the next round.  There were “sold out” signs at 1:00pm, 4:00pm, and again at 6:00pm as the festival stretched on into the evening. Some estimates suggest that it brought an extra 20,000 people to our market.

The event did have its issues. There are reports that not all traders benefited from the huge crowds. Specialty (General merchandise) Traders in the top end generally reported a poor day’s trade with only a few saying that their products clicked with the food crowd. Creating Queen St. events that can translate into business for the top end remains a very difficult task. There were also issues with Specialty Traders along Queen St. having to pack early so the event could continue on into the evening.

However, a real positive was that food vendors from other areas (F shed and Victoria St.) reported good business as they took advantage of the overflow of customers. Apparently many of our butchers benefited from the interest in special meat cuts for this style of cooking and are enthusiastic about its potential. The participants themselves, particularly those from the US, were very impressed with the response. Associated activities like cooking classes were sold out and even a class for prospective cooking judges was over-subscribed.

There is one very significant question that needs to be asked about this event. Why was it so successful? We have food related events most Sundays on Queen St. Why did this one attract such a huge response? Was it the fact that Australians are just BBQ crazy? Was it the link with our highly respected Meat Hall? Were slow cooked meats and huge portable ovens the key? Or was it the marketing and promotion of the event? No doubt these were all factors.

When I went to collect my mail on Monday morning, the Postmasters wife asked me how the big BBQ went. She said she had seen it on TV, possibly one of the morning shows. I have since had other family and acquaintances mention that they had heard of the event in advance so it would appear that it gained significant exposure. The organisers have advised us that they had assistance from professional marketing people and that a lot of hard work went into things like media liaison, press releases, and poster distribution. There may be lessons here for other events at QVM and indeed for marketing the market generally.

It would appear that there is a lot to be learned from the success of Melbourne BBQ Festival at QVM. What is the old saying? – “Success breeds success.”

COMMENTS:
07/02/2015 22:24:34 Sunday BBQ event "As a general trader, our business was so bad, that we did not have such a bad day in years.
I hope the Market office do understand that we are the back bone of the market ( general traders, fruiters, butures etc..)and without us the market will not exist.
If they do so much publicity for a casual Sunday BBQ, they should certainly do much much more publicity for all the traders who spend decades, with all the dificulties, and their livelihood depends on this."
08/02/2015 - It should be noted that the marketing and promotion mentioned in this article was done by the event organisers, not QVM. - Ed