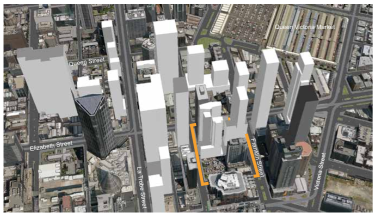 There have been a number of reports in Melbourne's press this week concerning "hyper-dense" apartment towers that were destined to make Melbourne CBD denser than Hong Kong, New York, and Tokyo. Our graphic shows new residential tower development around Elizabeth and Latrobe Streets as at December 2014.

A report by Leanne Hodyl, a co-ordinator of city plans and policy at City of Melbourne, has been very critical of the number of apartments being built and the impact on the streets around them. - "It will create a legacy of...homes that lack access to light, air ... and that diminish the quality of the streets and parks below," the report says. New and proposed apartment towers close to the market have been identified as falling in to this category.

Media reports suggest that the Victorian State Government needs to set stricter standards controlling the size of apartments, their density, and the open spaces and other facilities necessary to maintain quality living standards in Melbourne.