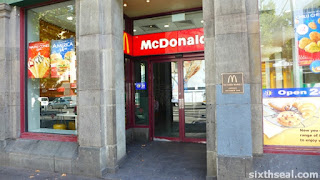 McDonalds is a fast food icon which has achieved amazing growth globally but the pace is faltering as retail headwinds take their toll. Like every retailer around the world, McDonalds are having to reassess their future.

In the U.S., where a third of their restaurants reside, McDonalds have recorded a 2% drop in sales and a 13% drop in profit. As a consequence, McDonalds are reviewing more contemporary and healthier food options, an area that some of their competitors have embraced. In Australia the move away from the classic burger has already started with the "Create Your Taste" campaign where customers are encouraged to design their own burgers. The success of this campaign has already seen some take-up in the U.S.

McDonalds have experienced decline before. Back in 2003 U.S. sales plummeted as their meteoric pace of expansion led to lower standards of service and cleanliness, and they seemed to lose focus on their core menu.  Refocusing and slowing the rate of expansion produced a dramatic turnaround.

It can be said that the McDonalds experience is repeated in retail businesses of all types and sizes around the globe. The constant need to reassess and reinvent has become the norm in a fast changing and unpredictable retail world. Not even market traders at QVM are immune.