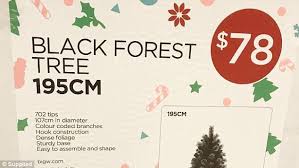 Embattled retailer Big W has been in the news for all the wrong reasons this week with two episodes that might make them look at some of their marketing and in-store practices.

First was the furore over making Christmas trees and decorations non-Christmas. Big W were promoting Christmas trees as “Grand Pine Tree”, “White Forest Tree”, or “Black Forest Tree”. It would appear that attempting to tread the middle road of religious beliefs has back-fired big time for Big W with shoppers complaining openly on social media.

Now they have a shopper complaining that she has been victimised by Big W staff who attempted to remove containers of baby formula from her trolley in case she was on-selling to China. There is a huge demand for Australian baby formulas in China following following health issues with products from other countries. The customer was Asian in appearance although the fact that she had a 7 month infant at her chest seems to have escaped the notice of shop staff. At least that is the way social media has interpreted their action.

And it is not just Big W in the wars this week. Aldi have copped social media criticism for “treating their customers like cattle”. Apparently a particularly sensational special toy offer involving kids ride-ons for under $200 had queues of eager customers lining up for some 40 minutes prior to store openings in some locations. Customers were disgruntled to find that some stores had only two items in stock. Blatant loss-leading can have a price in consumer dissatisfaction.