Myer In The Wars 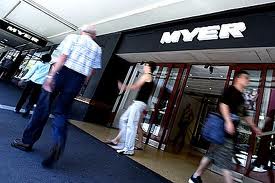 The problems for the Myer department stores seem to be compounding as its share price plunges from its $4.20 launch price to just 54 cents this week.

The Myer CEO Richard Umbers resigned suddenly during the week following another profit downgrade. Meanwhile boardroom raider and major shareholder, Solomon Lew, has asked for a spill of the board - “It is not in the best interests of shareholders that the current Myer board be allowed to preside over another year of declining sales, eroding profits and further share price deterioration before urgently needed change is introduced at board level.”

According to the SMH, ex Myer CEO Bernie Brooks has just returned from his role helping South Africa’s biggest non-food retailer avoid collapse, and whilst he will not engage directly in criticism of Myer he talks about department stores reducing the size and number of stores and concentrating on unique offers. Others have talked about the historical attempt by department stores “trying to be everything to everybody” and the need to focus their offer on unique products and services.

Myer’s Chairman, Garry Hounsell, has been in the news this week with his now famous (and probably regretted) statement - 'I'm old fashioned in terms of retail' - not quite what shareholders were looking for as they face a vacuum without a CEO, at least in the short term.