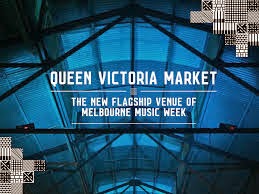 Melbourne Music Week had a significant impact on our Queen Victoria Market and our initial report gives it a fail. The event was discussed at a meeting of Trader Representatives on Tuesday.

That is not to say that there were not some good things to come out of the event for traders. The Therry St. Marquee was a standout success. A number of marquee traders reported significantly improved takings and were impressed by the impact of a more up-market location and the attitude of their customers. Apparently the different location meant that customers saw them in a more positive light. Even traders who didn't do standout business were glowing in their praise of the trading environment and the benefits of leaving your stock on site.

Another positive outcome was the glimpse into String Bean Alley's potential as a successful trading aisle. Modifying the approaches to SBA, and filling it with traders, had an obvious impact on the resident traders and was probably their first look at really successful trading outside the Night Market.

Now for the bad news - there were traders who suffered because of Music Week. Apparently, many traders found the impact of the event to be neutral but there was a core group in the J,K,L block who suffered sales decline particularly while loud music was being played in the adjacent stage area. And, of course, Sunday 15th was a disaster day with profane rap music creating a distinctly unsuitable environment for family groups, particularly with young children. Then there were those traders who were relocated into other areas of the market, sometimes in smaller stalls, who experienced sales losses.

Trader Representatives are preparing a letter to management requesting a compensation arrangement for traders who can demonstrate significant sales loss. We will also be seeking a blanket rent reduction for traders immediately adjacent to the music area particularly on the occasions when excessively loud or profane music was played.

There were other issues considered at Tuesday's meeting including -
1.     The Peel St. facade of QVM looked like the market was closed. This was probably impacted by the construction zone wire fencing and the "trendy" black and white decor of MMW. The answer would seem to be to make future events an integrated part of QVM rather than replacing a section of QVM.
2.     J shed was particularly impacted by the event. We have probably under-estimated the importance of this aisle as a thoroughfare and in future it should remain open.
3.     Closing the car park entrance into the top walkway impacted on traffic flow across the market and this sort of key entry point should remain open during an event.
4.     The blank wall at the bottom end of the stage area (the top walkway) created the illusion of a dead-end and needs to be better sign-posted.
5.     Loud music and trading do not go together.
6.     And finally, and most importantly, a music event is not conducive to market trading. Attendees at a music event are generally not your typical shopper and unlikely to add to sales performance for traders. The general view is that there are many events more likely to attract market friendly shoppers than a music event and perhaps a Jehovah's Witness conference would be a good start.

As an overall view, many traders acknowledge that any event will expose our market to a potentially new clientele and could have longer term benefits. But selecting events that are more retail friendly, and then organising them to maximise the potential return for traders, needs to be our priority. On this occasion there were winners and losers. In a fragile retail market there should not be losers. We need to learn from this event and do much better next time.


COMMENTS:
04/12/2014 00:04:22 mmw and the draw "In relation to mmw I  feel all the traders, especially those in J-L, should have their rent waived for the entirety of mmw. I agree with several traders here, there should be several draws, but it should all be in market vouchers, so they at least spend it here."
Posted by Editor at 12:35