Did You Get Caught By An April Fools Headline? 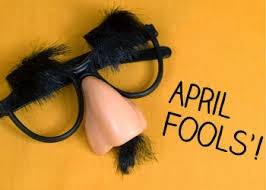 Victraders didn't participate in the April 1st fools game not that there weren't some possible headlines appropriate for our market. Take for example -

Neither would really qualify because April Fools headlines have to be at least slightly believable which leads us to some of the headlines around Australia yesterday.

"Four-wheel-drives will be banned from all Territory roads from next year" - yes that turned out to be fake and the article was actually having a dig at all the pristine four wheel drives in our country that rarely see a dirt road.

"TV Series, Downton Abbey, To Be Recreated In 70's Disco Era" - this article arose from the news that Downton Abbey is in its final season and there is much speculation about a revival of the British class theme somewhere down the track. We'll let you decide if that could be fact or fiction.

But our favourite headline on April 1st was this one -
"Shooters and Fisher's Party Join With Australian Sex Party To Form Sex Pistols."
- as one commentator put it - “Bullets and bongs are just natural bedfellows.”

Your editor has put a note in his diary for a suitable Victraders headline on April 1st 2016. Any early  suggestions?