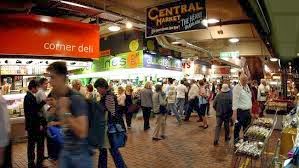 Adelaide’s famous city market has had 3 CEO’s in less than two years and 2 of its 5 Board members have recently resigned. A recent stoush between The Adelaide City Market Board and its new CEO Claude Baxter, has resulted in the CEO taking a leave of absence.
Baxter has a track record in rejuvenating the South Melbourne Market and creating a broader product mix while introducing new concepts like bars to attract a younger demographic.
Adelaide’s Central market recently moved away from direct council control and was applauded for establishing its independence but obviously it has suffered teething problems.
The problems experienced by Adelaide Market are not new to many markets around the world and the answers to these problems just as difficult to find. The author of an article in Adelaide’s Advertiser listed three key areas of concern –
Infrastructure – compared with European Markets, Adelaide is dark and “a bit grotty”.
Stall Mix – food obsessed countries overseas focus on specialised produce rather multiple stalls selling the same selection.
Operating Hours – Regular overseas markets operate 6 days and don’t have the confusing variations in operating hours found at Adelaide.

Recent calls for the council to take back control of the market have been criticised by trader representatives who view the move to independant control as the correct move. Traders are currently considering opening on Sundays and extending midweek hours to engage with city workers.

23/03/2014 08:33:52 Central market "The broader view of customers is that the last 6 months of the central market has never been better, the vibe is better, the markets looking better. I don't know about the politics but the experience is good."
23/03/2014 09:09:37 Adelaide Central Market "For clarification, the current CEO's name is Claude Baxter, and all board members have resigned, including the chairperson." D

Thank you D. Our apologies for getting Mr Baxter's name wrong (now corrected).- Ed.
Posted by Editor at 14:32