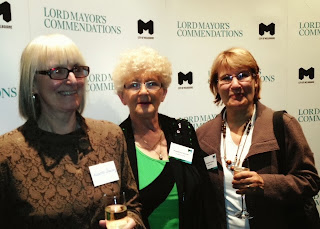 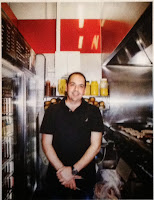 Maggie Korda (centre in our photo) received a silver commendation for more than 25 years trading and is shown being toasted by previous recipients Annette Stanisich (gold) and and Suzanne Smith (silver). Carl Greco from the Bratwurst Shop in the deli hall received a Bronze commendation. All awards were presented by Lord Mayor, Robert Doyle, and the evening featured excellent short videos about 4 of the recipients including a very touching and humorous video on husband and wife team Melhem and Zeina Sadaka who have operated City Tailoring in Swanston St. since 1988.

Performing our day to day business activities can be taken for granted at times and functions like this focus on the important contribution we all make to the City of Melbourne. Traders at Monday night's function agreed that more QVM Traders should take advantage of the opportunity to reflect on years of hard work and accept recognition in the City’s commendation program.

COMMENTS:
23/10/2013 10:56:09 Congratulations "Congratulation to all our award winners and it obviously shows that the traders at the Queen Victoria Market are working hard and trying to get the attention of their customers, the management and the City of Melbourne. I suggest for the next year award all the stall holders to be informed and each and everyone to be encouraged to participate in winning the awards."
Actually we did advise traders of the upcoming 2013 awards on this website back in March. Next year we will need to make a bigger splash. - Ed.
Posted by Editor at 10:14