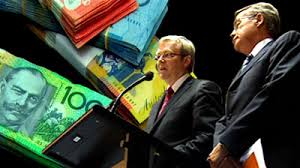 How often do you hear a QVM trader say "People just haven't got the money to spend"? Well that seemingly vague and pointless comment has now got support from a major international company and a solution to this problem may be found in the actions of one of our former Prime Ministers.

According to an article in the Harvard Business Review, Hersheys (one of the world's largest manufacturers of confectionary) was blaming its lack lustre performance on one major factor. It said that the average person was simply too poor to buy their products and allow their company to grow. You might remember that Cadbury in Tasmania recently decided to make its chocolate bars smaller rather than increase prices for similar reasons.

So maybe this "no money" thing isn't just a casual observation but one born from a stagnating world economy where people work harder and longer, and spend more of their income on mortgages and health care than ever before. The answer in the HBR article was for central banks to suddenly give everybody a big injection of cash. How silly is that?

But, hang on, isn't that what Kevin Rudd did immediately after the GFC? Back in 2009 a government stimulus package gave every Australian up to $950 as a cash payment. Many people felt all warm and fuzzy over that decision and went out spending. That was 6 years ago. There was a lot of debate about the effectiveness of the stimulus in the aftermath but some heavy hitting economic commentators said it did help avoid a recession. Maybe it is time for another official government stimulus package. I want to feel all warm and fuzzy again and buying a chocolate bar will be high on my list of purchases.