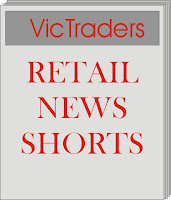 Charge Bar provides in store mobile phone charging stations to retailers with no cost to customers. Charge Bar expects that  the average chargee will spend at least $5 while waiting for their phone to charge. With over 70 installations in Sydney already, the distributors are expecting significant penetration into Australia’s retail market.

The Australian Retailers Association has launched a sales feedback program for all retailers through Roy Morgan Research. Participating retailers will receive an SMS each Monday morning asking if their sales for the previous week were Up, Down, or Same. Feedback will then be provided to each participant on the results.

David Jones has received a takeover offer from a company called EB Private Equity. The offer is for around $1.6 billion. EB Equity are a European-based investment company with a specialty in real estate and development. It is believed that David Jones ownership of its very valuable Melbourne and Sydney head stores is one of the attractions for EB. The David Jones share price soared 20% on the announcement.  Other major retailers, Myer and Billabong are seen as potential takeover targets as their share prices tumble.

Harvey Norman, Big W, Bunnings, Coles, and Super Retail Group have demanded changes to the GST-free threshold, trading hour restrictions, and labor laws as the only way to be competitive with the seven days a week, 24 hours a day online onslaught. They are claiming that Australian laws are simply not keeping up with the new worldwide changes in retailing.
Posted by Editor at 16:08